Introducing the Authors In Conversation Series! 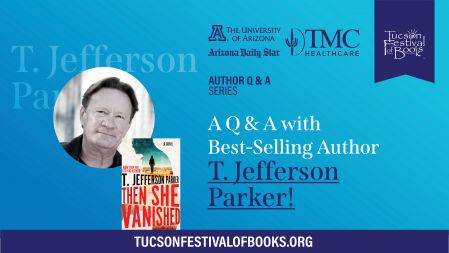 Novelist T. Jefferson Parker is a Southern Californian through and through.  Still beach-boy bronze at age 66, Parker has never lived anywhere else. All 23 of his books have been set in Los Angeles, Orange or San Diego Counties. But if Parker has a home away from home – particularly in the spring -- it might be Tucson.

He has attended the Tucson Festival of Books the last nine years in a row.  Parker likes it here, and the feeling is mutual.  His sessions are usual full, his book-signing lines long.

The police-procedural has no shortage of practitioners, but Parker has become one of mystery’s biggest stars.  His books have been published in 38 languages with sales now exceeding 400 million copies.

The first, “Laguna Heat,” was written nights and weekends while Parker was a reporter for the Newport Beach Daily Pilot. Published in 1985, it quickly became a best-seller. The rest, as they say, is mystery.

Parker’s newest book is “Then She Vanished,” the fourth in a series featuring San Diego investigator Roland Ford.  Released last month, “Then She Vanished” gave us a great excuse to catch up with T. Jefferson Parker:

Q:  You have become a regular at the Tucson Festival of Books, attending each on the last nine years.  Why do you keep you coming back?

TJP:  It’s a great festival and I always get to see Luis Alberto Urrea!

TJP:  Very surprising – it handed me the time to write a novel in record time.  The pages just flew out of the printer.  I’m not supposed to leave the house, so what’s a writer do but write?

Q:  You’ve always been a writer, but you began your career as a journalist.  What was the hardest part about your transition to author?

TJP:  Discovering my voice.  In journalism you kind of mute your voice.  In fiction, you need to hit the back of the house with it.

Q:  Was there a specific book or an author who influenced your decision to become an author?

TJP:  Joseph Heller’s “Catch-22” blew me away as a high school sophomore.  It delighted me in a hundred different ways, and it made me wonder for the first time if I could become a writer someday.

Q:  Were you tempted to tackle a genre other than Mystery?

My first book was a non-mystery about a surfer from Newport Beach.  It’s still in a closet somewhere, I think.  After that I wrote “Laguna Heat” and never looked back.   Well, looked back a couple of times and wrote mainstream novels.

Q:  Is there a single book you are particularly proud of?  For whatever reason your favorite?

TJP:  “California Girl.”  It’s about a murder that goes incorrectly solved for forty years.  So it’s got breadth.  It compresses time like only a novel can do.

Q:  Had you not become an author, what would you be doing now?

TJP:  I’d probably be a technical editor, which is what I was doing the day “Laguna Heat” was published.  I was laid off shortly after the book came out and was lucky enough never to need another real job.  Even after twenty-six novels I still dream that I’m currently employed as a technical editor.  Weird.

Q:  Lunch and an afternoon of conversation at your favorite restaurant. Which 2 contemporary authors would you invite?

TJP:  Don Winslow and C.J. Box, because they’re both friends.  Very good company, those two.   We might even get some fishing in that evening.  That sounds like heaven right now, after being locked down for COVID.

Q:  What piece of clothing says the most about you?

I’m a hat guy.  Summer I wear a Carlos Santana wide-brimmed Panama and winter a Borsalino felt fedora.  And a bunch of others!

Q:  Your newest book is “Then She Vanished.”   Is there a twist your readers might find surprising? Does Roland Ford throw up his hand in despair and join the seminary?