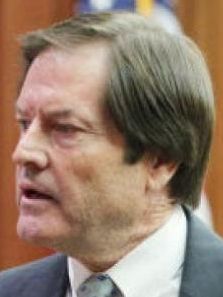 Appearing Courtesy of The Cunningham Family

Rick Unklesbay, a graduate of the University of Arizona, has been a prosecutor for more than 30 years. His book, "Arbitrary Death: A Prosecutor’s Perspective on the Death Penalty," analyzes the death pentality system from a particularly knowledgable perspective. As a prosecutor who has tried twenty death penalty cases, Unklesbay has witnessed first hand the interworkings of the death penalty system.

Over a career spanning nearly four decades, Rick Unklesbay has tried over one hundred murder cases before juries that ended with sixteen men and women receiving the death sentence. Arbitrary Death depicts some of the most horrific murders in Tucson, Arizona, the author's prosecution of those cases, and how the death penalty was applied. It provides the framework to answer the questions: Why is America the only Western country to still use the death penalty? Can a human-run system treat those cases fairly and avoid unconstitutional arbitrariness? It is an insider's view from someone who has spent decades prosecuting murder cases and who now argues that the death penalty doesn't work and our system is fundamentally flawed. With a rational, balanced approach, Unklesbay depicts cases that represent how different parts of the criminal justice system are responsible for the arbitrary nature of the death penalty and work against the fair application of the law. The prosecution, trial courts, juries, and appellate courts all play a part in what ultimately is a roll of the dice as to whether a defendant lives or dies. Arbitrary Death is for anyone who wonders why and when its government seeks to legally take the life of one of its citizens. It will have you questioning whether you can support a system that applies death as an arbitrary punishment -- and often decades after the sentence was given. More/less