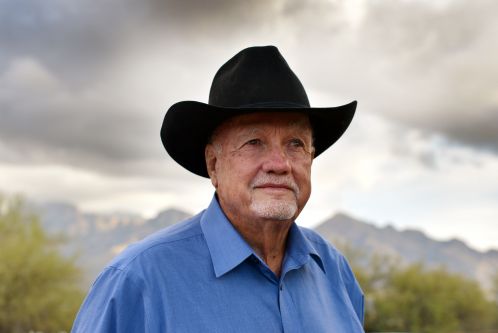 Alan Day’s upbringing branded him a cowboy from the day he was born and to this day, claims that he has soil running through his veins. He was part of the third generation to grow up on the 200,000-acre Lazy B cattle ranch straddling the high deserts of southern Arizona and New Mexico. The ranching and cowboy lifestyle appealed to him so greatly that after graduating from the University of Arizona, he returned to manage Lazy B for the next 40 years. During his career, he received numerous awards for his dedicated stewardship of the land. In 1989, Alan purchased a cattle ranch in Nebraska and soon after, a ranch in South Dakota. The latter became the first government-sponsored sanctuary for unadoptable wild horses. He developed and successfully used a herd modification-training program for his 2,000 head of cattle and 1,500 wild mustangs. He and his sister Sandra Day O'Connor co-authored the New York Times bestseller, i"Lazy B: Growing Up on a Cattle Ranch in the American Southwest." Alan also wrote the award-winining memoir, "The Horse Lover: A Cowboy's Quest to Save the Wild Mustangs," about his expriences on the wild horse sanctuayr, and "Cowboy Up!: Life Lessons from the Lazy B." Now retired from ranching, Alan lives in Tucson.

In Cowboy Up, Alan Day shares thirty-five stories about his experiences ranching and _cowboying_ on the 200,000 acre Lazy B cattle ranch in southeastern Arizona. Alan has had adventures that most people couldn_t even conjure in their wildest imaginations. Not only are those adventures fun to read and live vicariously through, but they offer insights and lessons that anyone can apply to their life even if they may never sport a cowboy hat or boots or ride a horse. More/less

He already owned and managed two ranches and needed a third about as much as he needed a permanent migraine: that’s what Alan Day said every time his friend pestered him about an old ranch in South Dakota. But in short order, he proudly owned 35,000 pristine grassy acres. The opportunity then dropped into his lap to establish a sanctuary for unadoptable wild horses previously warehoused by the Bureau of Land Management. After Day successfully lobbied Congress, those acres became Mustang Meadows Ranch, the first government-sponsored wild horse sanctuary established in the United States. The Horse Lover is Day’s personal history of the sanctuary’s vast enterprise, with its surprises and pleasures and its plentiful dangers, frustrations, and heartbreak. Day’s deep connection with the animals in his care is clear from the outset, as is his maverick philosophy of horse-whispering, with which he trained fifteen hundred wild horses. The Horse Lover weaves together Day’s recollections of his cowboying adventures astride some of his best horses, all of which taught him indispensable lessons about loyalty, perseverance, and hope. This heartfelt memoir reveals the Herculean task of balancing the requirements of the government with the needs of wild horses. More/less