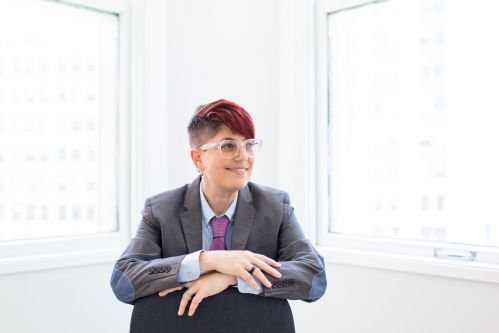 Annalee Newitz is an American journalist and author of fiction and nonfiction. Newitz is the recipient of a Knight Science Journalism Fellowship from the Massachusetts Institute of Technology, and has written for Popular Science, The New Yorker, and The Washington Post. Newitz founded the science fiction website io9 and served as editor-in-chief from 2008–2015, and then became editor-in-chief at Gizmodo. Currently Newitz is a contributing opinion writer at The New York Times. Newitz's book "Scatter, Adapt, and Remember: How Humans Will Survive a Mass Extinction" was nominated for the Los Angeles Times Book Prize in Science. Their first novel, "Autonomous," won a Lambda award. Their most recent work is "The Future of Another Timeline."

“A revolution is happening in speculative fiction, and Annalee Newitz is leading the vanguard. "--Wil Wheaton From Annalee Newitz, founding editor of io9, comes a story of time travel, murder, and the lengths we'll go to protect the ones we love. 1992: After a confrontation at a riot grrl concert, seventeen-year-old Beth finds herself in a car with her friend's abusive boyfriend dead in the backseat, agreeing to help her friends hide the body. This murder sets Beth and her friends on a path of escalating violence and vengeance as they realize many other young women in the world need protecting too. 2022: Determined to use time travel to create a safer future, Tess has dedicated her life to visiting key moments in history and fighting for change. But rewriting the timeline isn’t as simple as editing one person or event. And just when Tess believes she's found a way to make an edit that actually sticks, she encounters a group of dangerous travelers bent on stopping her at any cost. Tess and Beth’s lives intertwine as war breaks out across the timeline--a war that threatens to destroy time travel and leave only a small group of elites with the power to shape the past, present, and future. Against the vast and intricate forces of history and humanity, is it possible for a single person’s actions to echo throughout the timeline? Praise for The Future of Another Timeline: "An intelligent, gut-wrenching glimpse of how tiny actions, both courageous and venal, can have large consequences. Smart and profound on every level.”—Publishers Weekly (starred review) "You close the book reeling with questions about your own life and your part in changing the future."—Amy Acker, actress (Angel and Person of Interest) More/less

"Autonomous is to biotech and AI what Neuromancer was to the Internet."—Neal Stephenson "Something genuinely and thrillingly new in the naturalistic, subjective, paradoxically humanistic but non-anthropomorphic depiction of bot-POV—and all in the service of vivid, solid storytelling. "—William Gibson When anything can be owned, how can we be free Earth, 2144. Jack is an anti-patent scientist turned drug pirate, traversing the world in a submarine as a pharmaceutical Robin Hood, fabricating cheap scrips for poor people who can’t otherwise afford them. But her latest drug hack has left a trail of lethal overdoses as people become addicted to their work, doing repetitive tasks until they become unsafe or insane. Hot on her trail, an unlikely pair: Eliasz, a brooding military agent, and his robotic partner, Paladin. As they race to stop information about the sinister origins of Jack’s drug from getting out, they begin to form an uncommonly close bond that neither of them fully understand. And underlying it all is one fundamental question: Is freedom possible in a culture where everything, even people, can be owned? More/less