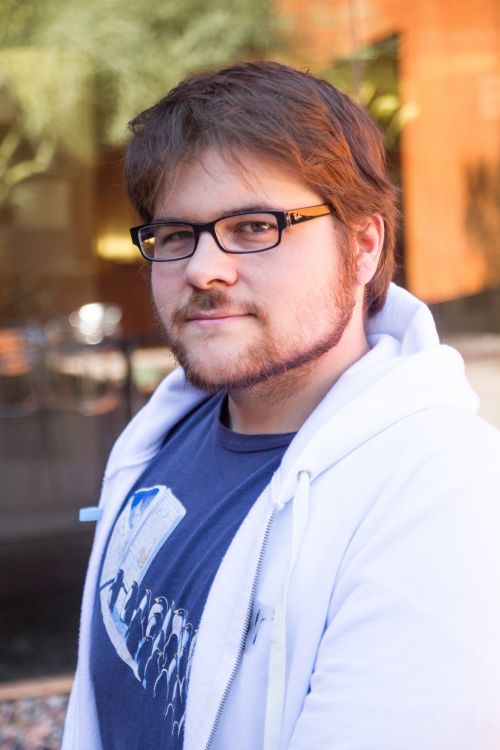 Sam Sykes has done many things worthy of note, most of them involving violence of one manner or another. Amongst his feats of strength, he counts the following: wrestling a Kodiak bear to the earth, defeating nine of ten prime ministers, founding, and later destroying, the East India Company, the Renaissance.

Those are most likely true, as Sam Sykes is not given to lying without cause.

Sam Sykes currently lives in the United States with his two hounds and, at any given time, is probably yelling at something inanimate. "Tome of the Undergates" is his first book, but far from his last. At 25, Sam Sykes is in an excellent position to provide entertainment while other authors are dying from various infections and stress-related illnesses. Sam Sykes looks forward to being one of the sole providers of fantasy entertainment, assuming no other authors are actually discovered in the next 40 years. His latest book is "Seven Blades in Black."

Acclaimed author Sam Sykes returns with a brilliant new epic fantasy that introduces an unforgettable outcast magician caught between two warring empires. Her magic was stolen. She was left for dead. Betrayed by those she trusts most and her magic ripped from her, all Sal the Cacophony has left is her name, her story, and the weapon she used to carve both. But she has a will stronger than magic, and knows exactly where to go. The Scar, a land torn between powerful empires, where rogue mages go to disappear, disgraced soldiers go to die and Sal went with a blade, a gun, and a list of seven names. Revenge will be its own reward. For more from Sam Sykes, check out: The Affinity for Steel TrilogyTome of the UndergatesBlack HaloThe Skybound Sea Bring Down HeavenThe City Stained RedThe Mortal TallyGod's Last Breath More/less
God's Last Breath
Sci-Fi / Fantasy / Horror
Orbit
December 2017
ISBN 9780316374934
704 pages
$16.99, OUTOFSTOCK
Buy now

Acclaimed author Sam Sykes returns with the exhilarating conclusion to his Bring Down Heaven trilogy. The great demon Khoth-Kapira has broken free of his prison and taken his first step upon the mortal world. And he owes it all to Lenk. Believing that the demon will heal a broken world that the gods have abandoned, Lenk serves as reluctant champion to Khoth-Kapira's cause. But as the desperate and fearful flock to Khoth-Kapira's banner, begging for salvation, Lenk begins to doubt his patron's great designs. The city of Cier'Djaal, meanwhile, has become the field for the last great battle of mortals. And as humans, shicts and tulwar prepare to tear each other apart, none are aware of the ancient horror that marches upon their tiny wars. At the tip of a spear or beneath the heel of demons, the reign of mortals ends. Bring Down HeavenThe City Stained RedThe Mortal TallyGod's Last Breath More/less