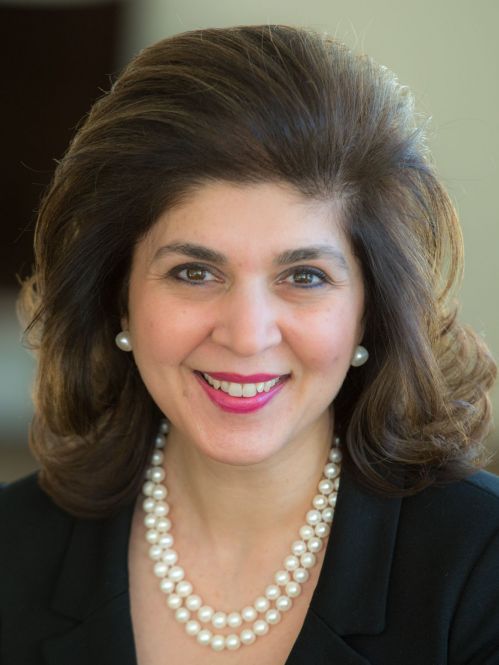 Farah Pandith is an author, foreign policy strategist and former diplomat. A world-leading expert and pioneer in countering violent extremism, she is a frequent media commentator and public speaker. Her book is "How We Win: How Cutting-Edge Entrepreneurs, Political Visionaries, Enlightened Business Leaders, and Social Media Mavens Can Defeat the Extremist Threat."

She served as a political appointee under Presidents George H.W. Bush, George W. Bush and Barack Obama, and most recently she was the first-ever Special Representative to Muslim Communities, serving both Secretaries Hillary Clinton and John Kerry. She has served on the National Security Council, at the U.S. Department of State and the U.S. Agency for International Development (USAID) in various senior roles. She has also served on the Department of Homeland Security’s Advisory Council, chairing its task force on countering violent extremism. She is a senior fellow with the Future of Diplomacy Project at the Belfer Center for Science and International Affairs at the Harvard Kennedy School as well as an adjunct senior fellow at the Council on Foreign Relations. Pandith divides her time between Washington, D.C., London and Cambridge, Mass.

There is a war being fought, and we are losing it. Despite the billions of dollars spent since 9/11 trying to defeat terrorist organizations, the so-called Islamic State, Al Qaeda, and other groups remain a terrifying geopolitical threat. In some ways the threat has grown worse: The 9/11 hijackers came from far away; the danger today can come from anywhere—from the other side of the world to across the street. Unable to stem recruitment, we seem doomed to a worsening struggle with a constantly evolving enemy that remains several steps ahead of us. Unfortunately, current policies seem almost guaranteed not to reduce extremist violence but instead to make it easier for terrorists to spread their hateful ideas, recruit new members, and carry out attacks. We actually possess the means right now to inoculate communities against extremist ideologies. In How We Win, Farah Pandith presents a revolutionary new analysis of global extremism as well as powerful but seldom-used strategies for vanquishing it. Drawing on her visits to eighty countries, the hundreds of interviews and focus groups she’s conducted around the world, and her high-level experience in the Bush and Obama administrations, Pandith argues for a paradigm shift in our approach to combat extremism, one that mobilizes the expertise and resources of diplomats, corporate leaders, mental health experts, social scientists, entrepreneurs, local communities, and, most of all, global youth themselves. There is a war being fought, and we can win it. This is how. More/less