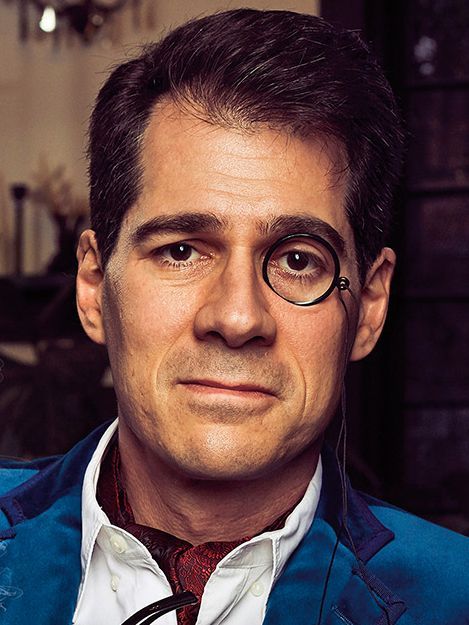 Joel Stein was not easy to work with on this bio. He demanded a lot of changes, particularly in regard to his photo, which he believed could be adjusted to make him look younger, fitter, and, somehow, “famouser.” The only facts he provided that were verifiable were that he was a staff writer and columnist for Time magazine for 20 years, where he wrote 22 cover stories, that he was a columnist for Entertainment Weekly and the Los Angeles Times and that he is the author of "In Defense of Elitism: Why I'm Better Than You and You're Better Than Someone Who Didn't Buy This Book" and "Man Made: A Stupid Quest for Masculinity." Also that he has taught at Princeton, written for several sitcoms and  appeared as a talking head on television shows. There is no factual basis for his claim that his writing has “saved millions of lives and destroyed many more marriages.”

The night Donald Trump won the presidency, our author Joel Stein, Thurber Prize finalist and former staff writer for Time Magazine, instantly knew why. The main reason wasn't economic anxiety or racism. It was that he was anti-elitist. Hillary Clinton represented Wall Street, academics, policy papers, Davos, international treaties and the people who think they're better than you. People like Joel Stein. Trump represented something far more appealing, which was beating up people like Joel Stein. In a full-throated defense of academia, the mainstream press, medium-rare steak, and civility, Joel Stein fights against populism. He fears a new tribal elite is coming to replace him, one that will fend off expertise of all kinds and send the country hurtling backward to a time of wars, economic stagnation and the well-done steaks doused with ketchup that Trump eats. To find out how this shift happened and what can be done, Stein spends a week in Roberts County, Texas, which had the highest percentage of Trump voters in the country. He goes to the home of Trump-loving Dilbert cartoonist Scott Adams; meets people who create fake news; and finds the new elitist organizations merging both right and left to fight the populists. All the while using the biggest words he knows. More/less

The smudge looked suspiciously penis- like. The doctor confirmed: "That's the baby's penis!" which caused not celebration, but panic. Joel pictured having to go camping and fix a car and use a hammer and throw a football and watch professionals throw footballs and figure out whether to be sad or happy about the results of said football throwing. So begins his quest to confront his effete nature whether he likes it or not (he doesn't), by doing a twenty-four-hour shift with L.A. firefighters, going hunting, rebuilding a house, driving a Lamborghini, enduring three days of boot camp with the U.S. Army, day-trading with $100,000, and going into the ring with UFC Hall of Famer Randy Couture. Seeking help from a panel of experts, including his manly father-in-law, Boy Scouts, former NFL star Warren Sapp, former MLB All-Star Shawn Green, Adam Carolla, and a pit bull named Hercules, he expects to learn that masculinity is defined not by the size of his muscles, but by the size of his heart (also, technically, a muscle). This is not at all what he learns. More/less