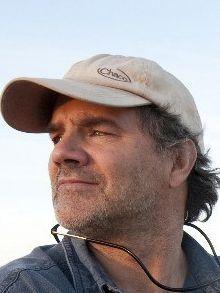 Jon Waterman found his calling as a writer while shooting photographs on expeditions more than four decades ago. Drawn to the physical challenge and peace he felt in the natural world, he continually fell short explaining this allure to others. The necessity of being fully present in the outdoors to witness beauty and then to preserve the natural world became essential to Waterman. So he turned to writing to explain both adventure and conservation.

He has also shot and written television films, including “The Logan Challenge,”  “Surviving Denali,” “Odyssey Among the Inuit,” “ANWR Trek" and "Chasing Water."

Waterman is mostly known for his Northern explorations, detailed in many of his books and countless journals since 1978. Beginning in 2007, the rivers of the Southwest began to call, with an extended journey and National Geographic Society research projects. For two ambitious water and river conservation expeditions, he lectured extensively, produced a comprehensive river map and a photography exhibit, then published two books, "Running Dry" and "The Colorado River."

Waterman is grateful for support and repeated funding from National Geographic, two grants from the Walton Family Foundation, and grants from the Storer Foundation, SavetheColorado.org, the Kenney Brothers Foundation, New Belgium Brewing, Patagonia and the Campion Foundation. He has two sons and lives in Carbondale, Colo.

"Profiles of 60 parks--from battlefields to national seashores--administered by the National Park Service, highlighting their diverse appeal and available outdoor activities. A brief glimpse is given of 29 additional parks, including the newly created Indiana Sand Dunes." More/less

The history of mountaineering began on Denali with the legendary story of three gold miners (called "Sourdoughs" because they carried sourdough starter with them at all times) who claimed to have summited after climbing more than 8,000 feet of steep snow and ice, then back down again--all in a single and incredibly dangerous day in 1910. Lugging a 25-pound, 14-foot flagpole to mark their success, they took on North America's highest peak using sheet metal crampons, coal shovels, hatchets, and alpenstocks to balance their way up the mountain. Was the expedition a success or a hoax? Denali climber Jon Waterman brings this colorful mountaineering mystery to life. More/less